Royal Leopold is the first Belgian hockey club to have its worn-out artificial turf recycled by Re-Match. 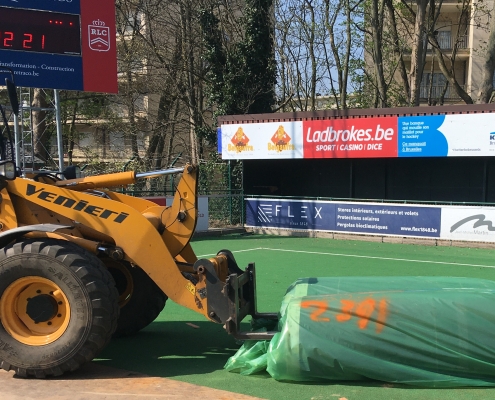 The city of Ukkel just south of Brussels is the home to Royal Leopold Hockey Club – one of the most successful hockey clubs in Belgium. Established in 1893 as a football club and named after King Leopold, the club has strong traditions and many of the 2500 people who today play either tennis or hockey at the club belong to families who have been members for generations.

This year, two hockey fields out of the club’s 7,5 hectares had reached their end-of-life and needed replacement. Careful considerations were made – not only into which type of new field should be chosen but also how to dispose of the worn-out turf.

“The Royal Leopold Hockey Club is very environmentally conscious, so it was important for us to find a solution where the worn-out turf would be handled in the most sustainable way possible and recycled. After having studied the various alternatives, we chose to go with Re-Match,” says, Mr Bart Imbrechts, project manager of Lesuco, who is the contractor on the re-installation project. “Of course, we were also impressed by their new sleeving concept. This way, we could avoid spillage of microplastics on the pitch, our walkways and parking lot.”

So, during two sunny days the two artificial turf pitches were rolled up, put into sleeves and made ready for transport.

“We are happy to see that also big hockey clubs like RLC are choosing our recycling solution for their end-of-life turf,“ says regional sales manager for Re-Match, Eric McGuire and continues:

“The pitches from RLC have now been put in sleeves marked with unique numbers and are waiting in a temporary depot. From there, they will be sent for full recycling at the new factory which Re-Match will build in the Netherlands.”