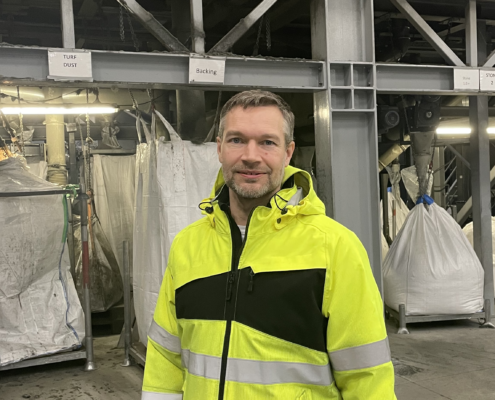 With the factory blueprint for the future Re-Match recycling plants in place, building of the new factory in Tiel well under way and its factory line on order, Dr. Stefaan Florquin who initially joined Re-Match in March 2019 as CEO and continued in September 2020, as COO, has decided to retire.

“We thank Stefaan for his contributions in professionalising the Re-Match organisation on the journey to becoming the new standard in artificial turf recycling.” says Nikolaj Magne Larsen, CEO of Re-Match.

Plant Manager, Jesper Skov who was hired last year with the view to follow Stefaan Florquin as COO, brings with him extensive experience in plant management and head of operations from positions all over Europe – spanning from edible oil extraction over production of sweets to industrial bakeries.

The Dutch facility, in which Stefaan Florquin has been deeply involved, will have twice the capacity compared to the existing line in Denmark and the patented separation techniques have been further improved based on learnings from Herning. The result is that the new factory concept will bring about higher yields and even better end products – to be re-introduced in sport facilities or reused in a variety of industrial applications.

Stefaan Florquin will continue to support Re-Match as an external consultant until the Dutch organisation is completely staffed and functioning. He will also leave his role as Director on the board of the ESTC where he represented the true recycling aspects of the business during his almost 2 years tenure.

“I want to congratulate Jesper on his new position and to wish Stefaan all the best -trusting that he will enjoy his active retirement with family and friends,” says Nikolaj Magne Larsen.

Facts:
Re-Match, founded in 2013 and headquartered in Denmark, is a pioneer in recycling of artificial turf pitches. With its patented technology the Herning company offers an environmentally sustainable recycling process that has received EU Environmental Technology Verification (ETV), as well as EuCertPlast. Also, the Herning factory has received ISO 9001 certification.

By the end of 2021, Re-Match has in total recycled more than 121.000 tonness of waste and hereof plastic fibre equivalent to 535 mill. plastic bags.

Re-Match is currently building its second factory in Tiel, The Netherlands and will also be building factories to the same template in Alsace, France – Pennsylvania, USA – and in two more locations yet to be disclosed.